The issue that concerns almost every single American is gas.  Not the gas that is produced by your digestive system, but the gas that fuels your

everyday transportation: busses, airplanes, cars, or most other vehicles. It is a widely known fact that we will eventually run out of this nonrenewable source. There has been much controversy over how to find more fossil fuels and one example of this is “fracking”.

Fracking, also called hydraulic fracking, is the process in which chemicals and water are injected at high pressure deep into the ground to release fossil fuels and natural gas.  There are many consequences to this process

that have both negative and positive results.  The positive result is that we have found a temporary solution to running out of fossil fuels.  The negative outcomes can include contaminated drinking water, dangers to the health of the community that surrounds the fracking site, and fractures in the ground which weakens the soil and can lead to more frequent earthquakes. The effects of contaminated drinking water include sensory, respiratory, and neurological damage.

Fracking was first discovered during the Civil War in 1862. During the Battle of Fredericksburg, Col. Edward A. L. Roberts saw that when artillery was fired into a narrow canal oil would release itself. He called the process tamping. In 1865 Roberts patented his idea and created the “Exploding Torpedo”. This invention increased production by twelve hundred percent 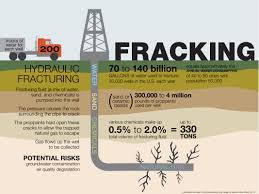 and planted the gateway for modern hydraulic fracking. However it wasn’t until the 1940’s when the birth of modern fracking became evident. In 1947, Floyd Farris began a study viewing the relationship between oil and gas production output and the amount of pressure used on each well. This study led to an experiment testing the effects of pressurized water in the ground. Though this experiment failed, it paved a gateway for modern hydraulic fracking which occurred in the 1990’s.

The process of fracking began when George P. Mitchell created a new technique in the 1990’s. This process combined hydraulic fracking with horizontal drilling. The process begins underneath the surface where rocks and shales hold gases in their pores. Fracking moves these resources from the pores to production wells. Horizontal “veins” or wells move these gases at high pressure and eventually causes either the gas, oil, or water to be released and stored in the storage tanks.

Fracking can also cost communities expensive maintenance bills. Methane gas and toxic chemicals are released from the ground and can contaminate the water. Contaminated water can be expensive to clean, but it depends how vast the contamination has spread. Fracking requires an extensive amount of resources to cause the natural gas to surface, about 1– 8 million gallons of water and about 40,000 chemicals.  These chemicals include lead, uranium, mercury, ethylene glycol, radium, methanol, hydrochloric acid, and formaldehyde.

Not only does fracking cause environmental disasters, it also has adverse health effects. On a normal day, worrying that your water is safe to drink is not typically your main concern.  Well, if you were living close to a site where an oil company was fracking for natural gas you probably would not be able to drink your tap water.