Growing food to feed our increasing population has changed drastically in the past few centuries. With the advent of genetic studies, the agriculture

industry today does not even begin to resemble the family farms many people think of. Now, many chemicals, such as herbicides and pesticides, are being applied to cash crops to aid in growth and increase yield. This may sound beneficial to not only to the producer, but also to us, the customer. But this may not be quite so. With the rise of these chemicals, there is also a growing concern for the health of the environment and for those who consume them.

One of the most popular herbicides is Roundup, which has the active ingredient glyphosate and is typically used for soybean farming.

Well, what makes Roundup so bad?

The Dirt on Bacteria

If Glyphosate destroys bacteria, shouldn’t that be a good thing?

Well, despite the preconceptions that all bacteria cause harmful diseases that weaken our systems, bacteria is essential for our survival. We have bacteria on our skin, our mouth, and most important our gut. These bacteria aid in digestion and without them we would not be able to obtain the maximum nutrients from the foods we eat.

How does this affect me?

If we consume products such as soybeans with glyphosate residue, it may upset the delicate balance of the gut microbiota, which end up dangerous for us.

The soybeans are genetically modified (which is another huge controversy in the agricultural field) to be resistant to the herbicides effects. However, 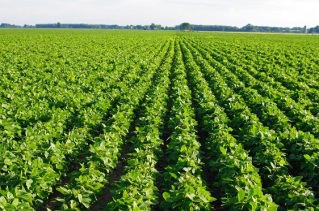 though it has its benefits, like preventing weeds from taking up vital resources in the environment, it also has its drawbacks.

Imagine if we were not able to get the foods out of our bodies; now that would be uncomfortable! Not being able to digest food, obviously, can lead to many bad consequences. We have trouble digesting foods contaminated with glyphosate, causing extreme bloat and an inability to break down vital nutrients.

But, in the eyes of the government and some scientific institutions, glyphosate is deemed “safe” and “non-bioaccumulative”. This response then prompts an array of new questions:

I don’t know about you, but a chemical that has not been thoroughly researched for its long term bioaccumulative effects should not have a place in our food, let alone our bodies.

Next time you’re in the grocery store, stop and think about what unnecessary chemical residues your food may contain. It may surprise you.