In 2013, carbon dioxide accounted for about 82% of all American greenhouse gas emissions from human activities. For decades, the world has seen a drastic increase in carbon dioxide, which ultimately brings about deadly consequences. The group that has been most affected by these emissions is underwater organisms.

The world has not always been plagued with ocean acidification. Acidity levels remained stable for millions of years, but the course of history changed with the rise of industrialization and factories. After this radical change from individual labor to mass production, factories became some of the worst purveyors of destructive pollution. The carbon dioxide released into the air from the factories is absorbed by the water. According to the NOAA Ocean Acidification Program, roughly one third of all carbon dioxide produced since the 1700’s has been absorbed by the Earth’s bodies of water.

When carbon dioxide interacts with seawater, it forms carbonic acid, which
simultaneously decreases the pH of the water and eventually leads to

ocean acidification and affects the amount of carbonate that can form. Calcium carbonate minerals are the building blocks for the skeletons and shells of many marine organisms. This means they are abundant building blocks for calcifying organisms to build their skeletons and shells. However, the acidification impedes the formation of hard outer shells that some sea creatures need to survive and damages the reefs that protect the diverse wildlife of the ocean. Animals find that their shells are dissolving and deteriorating as they are trying to calcify because of the harsh environment.

Increasing carbon dioxide emissions have caused a spike in the amount of damage done to the oceanic habitat and the animals that dwell there. An abundance of sea creatures are impacted by the devastating effects of growing pollution, including starfish, clams, clownfish, crabs, corals, jellyfish, krill, mussels, oysters, sea grass, sea urchins, spiny damsel fish, Walleye pollucks, and walruses. These creatures suffer horrible effects 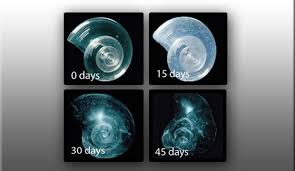 when subjected to the acidic environment. Starfish show a significant reduction in their muscle mass and coral reef growth is stunted when confronted with this issue. Oysters are particularly affected by the acidification because they can’t grow their hard outer shells to protect themselves from the hazardous predators that can then decimate their populations. If further damage is not prevented, sea life will continue to deteriorate.

There are many actions that we can take as a community to help the defenseless sea creatures that fall victim to the pollution created by anything from your everyday car to a large factory that has multiple smokestacks emitting carbon dioxide by the ton constantly. We encourage you to do your part to save the animals and ride your bike to work or invest in a clean-energy car. Globally, power generation emits nearly 10 billion tons of CO2 per year. If we want to counteract this and promote a better life for sea dwellers all around the world, we have to sacrifice some of our luxuries so that the animals can receive their necessities.

If you do want to be an active participant in our goal to save the sea creatures, follow this link so you can sign a petition to reduce your carbon emissions and encourage your friends to participate too! http://petitions.moveon.org/sign/reduce-carbon-emissions