The state of Hawaii has been increasingly dependent on foods imported from outside its native region, leading to its precarious position of not being able to sustain itself for even three days in the event of isolation from its trade partners.

Hawaii, the most isolated chain of islands in the world, has to import around 90% all of its food at a cost of more than $3 billion a year. Even the cattle that Hawaiians raise have to be shipped to the mainland where they are slaughtered, cleaned, packed and shipped back to the islands. Hawaii is so dependent on imports that if the mainland United States were unable to transport food to Hawaii for any reason, such as a natural disaster, Hawaii would run out of food in only three days.

Originally colonized by the ancient Polynesians around 500 to 700 C.E., these islands grew to support around one million natives by the time Europeans reached the Pacific using a sustainable agricultural system with taro, sugarcane, bananas, pigs, and chickens. The Europeans brought fatal diseases that drastically decreased the native population and soon sugarcane and pineapple plantations, as well as cattle ranches, overtook the islands, resulting in the reduction of Hawaii’s locally grown food percentage to 37. Today, Hawaii only produces a small portion of its food, and imports the rest, including taro – a once famous and staple crop of the islands. 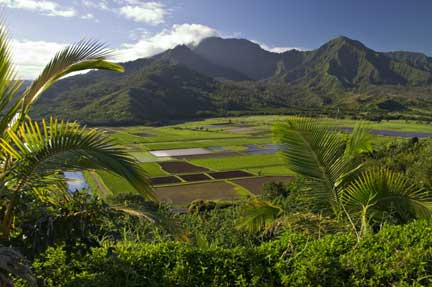 Because Hawaii is composed of a chain of islands, some of which have up to 14 different climates, it is difficult to use a lot of the land for agriculture. Due to active volcanoes and land-owning companies that are not interested in agricultural expansion, much of the land currently does not support farming. Hawaii’s position as a tourist destination also factors into its lack of agriculture. Furthermore, lands and resources, such as people to work and sources of energy such as petroleum, that are relatively cheap on the U.S. mainland, are significantly more expensive in Hawaii. This causes fewer and fewer people to support the agricultural industry.

In the search for alternative energy sources that do not require imports, attempts in recent years to expand the use of solar and wind have been made. However, there is not yet enough power or energy to easily support a large sustainable agricultural farm compared to the U.S. mainland, resulting in the importation of the vast majority of fuel.

Hawaii’s problem with energy serves as an opportunity to focus more on renewable energy sources such as solar power, wind power or hydro power. Utilizing the native volcanoes for geothermal energy could also be a possibility, despite its dangers.

The call for locally grown products in Hawaii is on the rise, however. A supermarket chain named Foodland, for example, attempts to exhaust all local markets first before importing food from the mainland and has successfully implemented a “Eat Local Tuesday” campaign with 200,000 people. Although Hawaii will never be completely self-sufficient, as it is part of a larger trade system, the chain of islands is on its way to becoming a place with a healthy balance of locally grown foods and imported ones.