The Biological Systems Engineering Department at Virginia Tech  is one of the most well respected in the country. BSE is defined as combining all types of science in order to solve problems in biological systems. One of their current projects is the stREAM Lab which brings scientist and educators together to develop a research facility that will give undergraduate and graduate students world class opportunities to study water quality and watersheds.

As students began their next activity in BSE, they approached a large cube-like frame and 4 different boxes of sediments underneath. Quizzical, they watched as a control knob 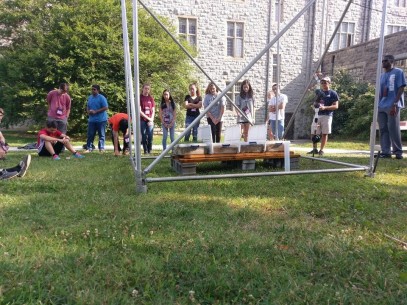 was turned and water began to spray from the suspended nozzle. The students were told that this was a rainfall simulator, and the boxes contained different materials that were possible runoff culprits. The purpose of the simulator, explained by PhD student Qualla Ketchum, was to observe the runoff amounts from 4 different mediums: straw, dyed mulch, soil, and grass. First, the students were asked to predict the amount of runoff that each medium would produce. After the simulation ran for about 25 to 30 minutes, it was observed that runoff was produced from the mud container first in a murky brown color. The next container that produced runoff was the mulch, which at first yielded brown water but at subsequent attempts became clearer. The chemical residue left from the dyed mulch proved to be more harmful at first due to h 0c   gher pollutant concentration, but as time went by and more samples were collected, the water samples contained less pigmentation. Straw and grass were more absorbent,and therefore were the best mediums for runoff prevention.

Following this display, Engineering Major students ventured to the stREAM lab, where 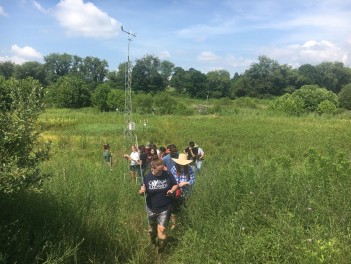 many PhD students conduct their research. Students waded into the water to witness the measurements of downstream velocity with university technology and aided with the turbidity test. In this test, students observed initial stream turbidity, then after kicking up rocks and stirring sediment, noted the diminished water quality in relation to high turbidity levels. Getting into the stream was the highlight of the day, due to the intense heat, around 95 degrees.. woaH.