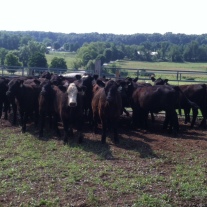 By: Ishan Arora, Hannah Kvasnicka, Elly Meng, Rena Miu, and Tyler Souza
All Governor’s School students were split into major courses since the start of govschool, but this was only used for counting off for attendance. However, this week marked the beginning of major courses! Group 17 shares some of their favorite memories of the major courses.
Hannah Kvasnicka was part of the Animal Science major where they went on a different field trip every single day of the week! They cut up swine uteri, viewed a stallion collection, handled cattle, and visited a meat center. Her favorite was cattle handling, and although she was no cattle whisperer, she really enjoyed the hands-on experience with livestock.
Elly Meng was a member of the Agricultural Economics major. Unlike Animal Science, they stayed in an air-conditioned classroom environment to learn about the fundamentals of the U.S. economy. Topics they covered included how to make $20 million, Jesus being a communist, and gender inequality in income for the same occupation. She really enjoyed discussing gender inequality in the workforce because it was made personal and the entire class was really engaged in debating the topic.
Tyler Souza was in the Food Science major. The first day of class he won a $15 gift card to Burger King for winning Food Science Bingo! Tuesday was a little more disappointing; they made burgers that they weren’t allowed to eat. But Tyler learned that after a lot of prodding from thermometers, the meat is not hygienic to eat anyway. The rest of the week included education on MRE’s or Meals Ready to Eat and more food safety. Tyler was surprised by his enjoyment of MRE’s, especially after he learned about the science behind easily made food for the military in combat.
Ishan Arora was in the Agricultural Engineering major course where the students went to a stream lab located at Stroubles Creek. The objective of the lab was to help restore the stream to it’s natural health. They dug holes, planted trees, and collected water samples. They focused on the topic of water quality. Ishan discovered that surface water actually has influence on ground water. He found the engineering process interesting, because there was a lot of experimenting and problem-solving involved.
Rena Miu is in the Plant Science major where the students learned about propagation techniques and garden care. Each day, the major met at the VT greenhouses. She particularly liked propagating succulents that the students will be able to take home at the end of governor’s school. Her favorite activity was taking a tour of the 3 Birds Berry Farm; the plant science majors got an exclusive tour of the farm a day before the entire govschool camp went berry picking.
These major courses definitely gave more specific insight on the agricultural relevance in our daily lives. Many kids would choose to spend their summer at the beach and vacationing, but group 17 can agree that all governor’s school kids have made the better choice.