Introduction to Antibiotics in Agriculture:

Antibiotics were incorporated into agriculture in the 1950s. Antibiotics are used in agriculture, pertaining to livestock production,

for disease treatment, disease prevention, and growth promotion. Animals, like humans, are prone to bacterial infections and diseases, and both are treated with the same antibiotics most of the time. Confined conditions make livestock vulnerable to disease and infection. Antibiotics help farmers reach their goal, to achieve maximum productivity to, and ultimately meet consumer demand. Antibiotics come in oral, topical, and injectable forms.

Antibiotic Resistant Bacteria: What are the Consequences?

FDA Regulations: Are Antibiotics in Agriculture a Danger to me?

The FDA has quickly come to recognize the importance of regulating use of antibiotics in animals, specifically within farms. 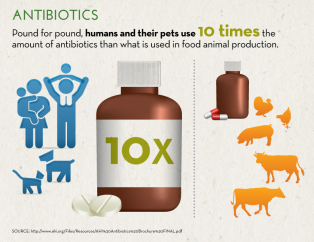 In order to combat the spread of a potentially harmful strain of bacteria, the FDA has determined specific limitations on antibiotic use in feed. It has been mandated that subtherapeutic use of antibiotics for growth promotion will not be tolerated with medically important drugs. The FDA further requires that a veterinarian prescribe antibiotics in order to treat farm animals for medication that they deem to be medically important. This limits the development of bacteria that are resistant to medication used in humans, so that antibiotic use in agriculture poses limited threat to the general population.